New Delhi: Rishi Kapoor’s daughter Riddhima Kapoor Sahni has been sharing memories of the actor with million dollar pictures of him with his family. Recently, she took to her Instagram stories and shared a couple of monochrome pictures of Rishi Kapoor with mother Krishna Raj Kapoor and wife Neetu Kapoor.

The first photo has Rishi Kapoor holding his mother’s hand while dancing. Riddhima captioned it as: “Reunited with his most favourite person.”

Krishna Raj Kapoor died in October 2018 in Mumbai. Rishi Kapoor had missed his mother’s funeral as at that time, he undergoing cancer treatment in New York.

Meanwhile, the other picture which Riddhima shared is from Rishi and Neetu Kapoor’s wedding celebrations. The couple, as a bride and a groom, smile for the cameras happily. She added a heart emoticon while posting it. 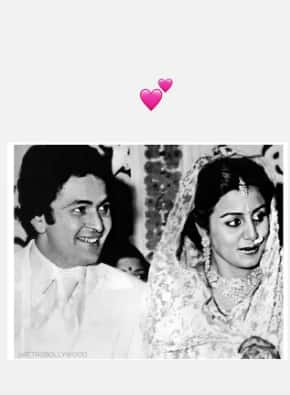 Riddhima couldn’t attend her father’s last rites. She arrived in Mumbai from New Delhi on May 2 by road with her daughter Samara. She did not get permission to fly down due to the nationwide lockdown.

After Rishi Kapoor’s death, she paid a heartwarming tribute to her father via Instagram. “Papa I love you. I will always love you – RIP my strongest warrior. I will miss you every day. I will miss your FaceTime calls every day! I wish I could be there to say goodbye to you! Until we meet again papa. I love you – your Mushk forever,” she posted.

Rishi Kapoor died on Thursday (April 20) morning after battling with cancer. His last rites were performed in the evening.

Rishi Kapoor’s prayer meeting was held over the weekend at his residence and his ashes were immersed in Banganga in Mumbai. He is survived by Neetu, Riddhima and son Ranbir Kapoor.