MIUI 12, the next iteration of Xiaomi’s Android-based operating system for smartphones, will debut with Dark Mode 2.0, the company revealed through a teaser posted on Chinese microblogging site Weibo. The new Dark Mode will bring features such as smart wallpaper dimming and dynamic font adjustments to provide an enhanced user experience, specifically in low-light environments. MIUI 12 will also broaden the coverage of the system-wide Dark Mode that debuted on Xiaomi devices back in early 2019 through MIUI 10.

As per the teasers posted on the MIUI account on Weibo, one of the big changes that MIUI 12 will bring to the users will be smart wallpaper dimming. This new feature will make necessary changes to the wallpaper to simulate the time of day, instead of darkening the entire wallpaper once the Dark Mode is enabled. Apple has so far provided a similar experience on macOS through a Dynamic wallpaper setting. Similarly, various third-party live wallpapers on Google Play also try to offer something similar.

The teaser image doesn’t specify whether the smart wallpaper dimming feature will be limited to a handful of system wallpapers — quite similar to macOS — or available for all wallpapers.

In addition to smart wallpaper dimming, Xiaomi has confirmed that MIUI 12 will expand the Dark Mode coverage to 42 system apps and 20 mainstream apps. This means that you’ll be able to enable the Dark Mode on many of the apps that don’t even support it natively. Xiaomi will also use a non-linear conversion of LAB and HSV colour space to provide a natural dark effect on over 100 global apps.

MIUI 12 will also include dynamic font adjustments to automatically reduce the weight of the system font to limit its glare on the screen. MIUI 11 already brought a dynamic font system that would be leveraged in enabling the new experience. Overall, the new addition will be aimed at enhancing readability in low light by changing the font weight. 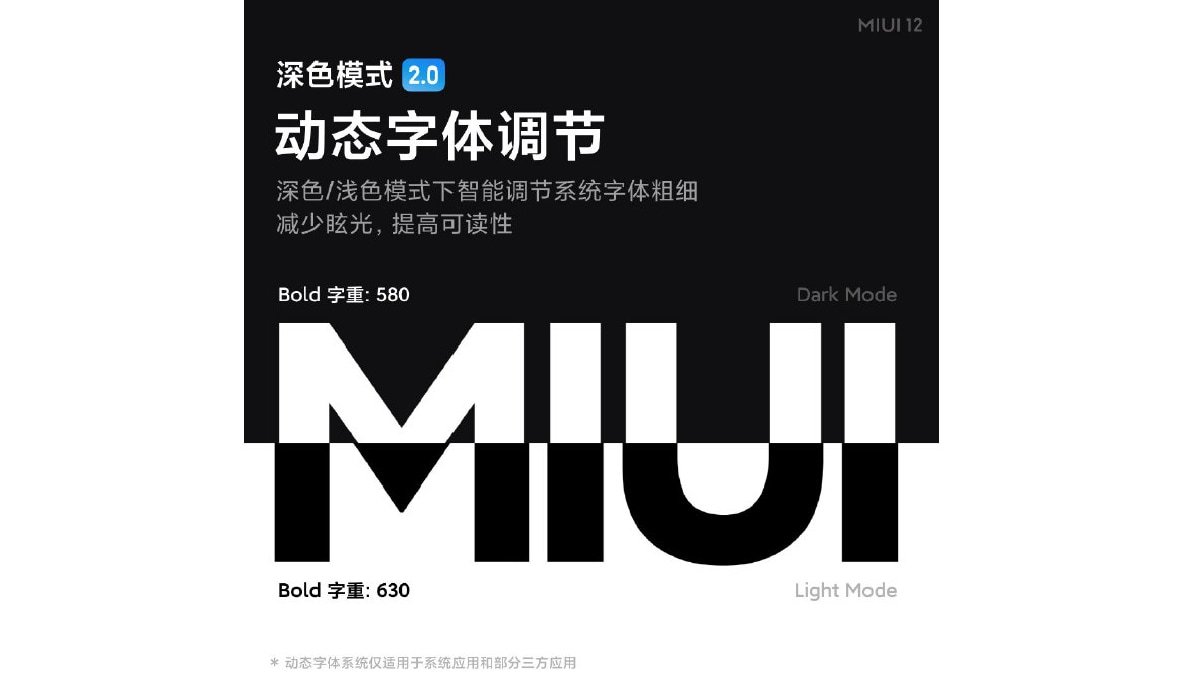 The presence of the Dark Mode 2.0 on MIUI 12 will additionally bring dynamic adjustments to the contrast. This will work in tandem with the ambient brightness to provide a comfortable viewing experience. Furthermore, there will be an integration with the technology developed by Germany’s TÜV Rheinland to reduce eye strain.

All these features will certainly make MIUI 12 a promising operating system in the world that has Huawei’s EMUI, OnePlus’ OxygenOS, Oppo’s ColorOS, and Vivo’s FuntouchOS amongst other proprietary Android skins. However, we’re yet to see how the new MIUI version will address annoying advertisement issues that we’ve seen in its previous generations. The Android-based operating system — just like its counterparts by Huawei, OnePlus, and Vivo — is also infamous for carrying a number of preloaded apps that can’t be uninstalled and require personal data access, without giving any value addition.

That being said, Xiaomi is announcing MIUI 12 as its next update in the MIUI family on April 27. The launch will take place through an online livestream where the China variant of the Mi 10 Lite 5G will also be announced.