New Delhi: Talented ‘Uri: The Surgical Strike’ actor Vicky Kaushal’s fan chat session on Instagram was an exciting one. His latest release ‘Bhoot Part One The Haunted Ship’ is now available on Amazon Prime Video and the actor announcing it decided to have a quick fan interaction in his ‘Ask me anything related to Bhoot’.

When a fan asked him if he is ever scared in real, the actor candidly replied saying he gets scared easily. And in the next question, he even opened up on having faced sleep paralysis a couple of times when asked if he ever experienced a ‘bhoot’ in real life. Check screen grab here: 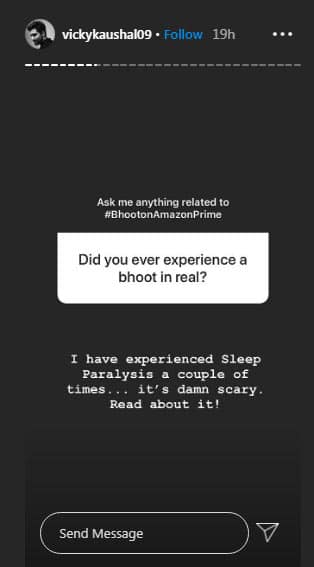 Vicky was last seen in Bhoot – Part One: The Haunted Ship which is written and directed by Bhanu Pratap Singh and jointly produced by Karan Johar, Hiroo Yash Johar, Apoorva Mehta and Shashank Khaitan.

The film is based on a true accident and narrates a tale of a couple on an abandoned ship on a beach. The movie stars Vicky Kaushal, Bhumi Pednekar and Ashutosh Rana in lead roles.

This was Vicky’s first outing with Bhumi Pednekar on-screen.