Mythological shows are keeping the audiences glued to the television screen. These shows are also dominating the TRP chart. One such show that is popular among audiences is Ramayan. Apart from Ramanand Sagar’s Ramayan, Anand Sagar’s Ramayan was also much talked-about, in which Gurmeet Choudhary and Debina Bonnerjee played the roles of Ram and Sita, respectively. The show is currently being aired in Dangal TV. Apparently, shooting of Anand Sagar’s Ramayan has been nothing less than a daredevil task for the entire cast. In a recent revelation Gurmeet shared an incident which could have been fatal for Debina Bonnerjee.

Recollecting about what could have been a catastrophic incident while shooting the wedding sequence, Gurmeet Choudhary said that Debina was wearing a dupatta on her head, which was so long that it was inside havan-kund.

The actor said, “Debina had this incident, we were shooting for a scene in the show, she had all this headgear and she was also wearing some really inflammable material.

The actor added, “The dupatta she had on her head was so long that we didn’t quite notice, it was inside the havan-kund and it caught fire. Thankfully, our DOP saw it and immediately raised an alarm. I helped her take the dupatta off her head. It would have been really bad.”

It has to be recalled that recently, Gurmeet Choudhary had revealed a challenging moment. He ahd revealed that because of the headgear (crown/mukut), he suffered head injuries as it was heavy and he had to wear it for long hours for shooting, but he later got used to it.

For the uninitiated, Gurmeet and Debina’s Ramayan is being aired at 7.30 pm and repeat telecast at 9.30 am only on Dangal TV. 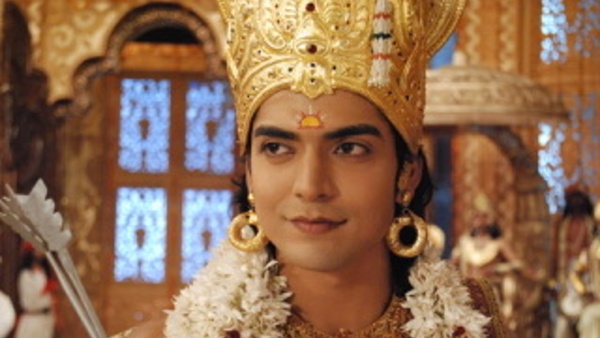