The wait is over, as Vikram and his son Dhruv are all set to enthrall the audience together on the big screen. The news about the duo’s maiden collaboration has been announced by Karthik Subbaraj, who will be helming the project, tentatively titled #Chiyaan60. The Pizza director took to his social media handle, to announce the big news, which has literally made the fans super excited for the movie.

He wrote, “Happy to announce that my next directorial after #JagameThandhiram is ‘CHIYAAN60‘ #Chiyaan60 Starring the awesome Chiyaan Vikram Sir & Dhruv Vikram.. And it will be an @anirudhofficial musical Produced by @Lalit_SevenScr @7screenstudio so excited for the film.”

The brand new poster of #Chiyaan60 released by the director along with the tweet, shows a hand of an elderly man holding a gun, while a kid holding the barrel of the same gun. Anirudh Ravichander is composing music for the film, which is expected to be a gangster flick. The movie will be produced by Lalit Kumar under the banner Seven Screen Studio. Interestingly, Kumar is also bankrolling the much-awaited Thalapathy Vijay movie, Master and Vikram’s Cobra.

It was earlier reported that Dhruv Vikram, who recently made his debut with the Tamil remake of Telugu blockbuster Arjun Reddy, will have a strong role to essay in the movie.

Meanwhile, Vikram is currently busy with his thriller venture, Cobra directed by Ajay Gnanamuthu. As per the director, the movie has so far completed 40-45% of the shoot. He has also revealed that the team will soon release the first single from the movie, which will be associated with Kerala’s traditional celebration. He will also appear in Mani Ratnam’s Ponniyin Selvan. On the other hand, Dhruv is likely to be a part of Gautham Vasudev Menon’s next outing, reportedly a romantic thriller. 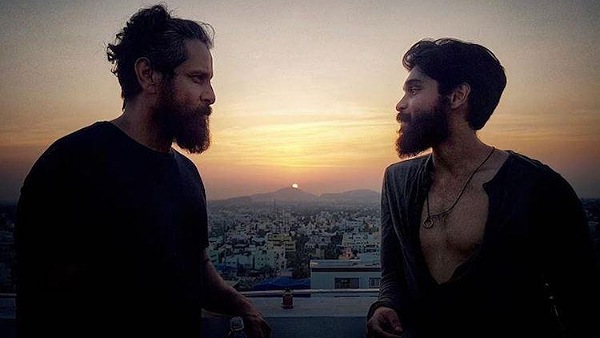