The latest episode of Bigg Boss 14 that aired on October 21 was high on emotions and drama. The episode begins with Bigg Boss asking the three seniors to name the team that they think should be eliminated individually. This is after the Toofani trio was unable to take a mutual decision.

Gauahar Khan says Sidharth Shukla’s team should be evicted as they clearly broke the rules of the given task. Sidharth disapproves and names Gauahar’s team as the losing unit. The deciding vote comes down to Hina Khan who says that according to her, it is Sid’s team should be eliminated. Sidharth completely loses it and seen having an ugly spat with Gauahar over each other’s decision.

Bigg Boss informs the housemates that Sidharth and his team members Eijaz Khan and Pavitra Punia along with ‘Gayab’ contestant Shehzad Deol are being evicted from the Bigg Boss 14 house. However, since Nikki Tamboli is a confirmed contestant, she is exempted from the elimination. But Nikki is inconsolable after hearing the news. Almost everyone is extremely sad and devastated to see Sidharth, Eijaz, Shehzad and Pavitra go home.

This is followed by Bigg Boss announcing another shocker. He asks seniors Hina and Gauahar to also leave the house whilst stating that it was a pleasure to have them in the house but it’s time for them to leave.

The high-octane moments just don’t end here in the episode. A few people in PPE kits are seen entering the house as a buzzer goes off scaring the living daylights out of the contestants remaining in the house. It is revealed that Eijaz and Pavitra have re-entered in the new part of the house called the red zone, which signifies danger.

Eijaz is furious and is seen stating that he doesn’t deserve to be in the red zone and that the decision was extremely wrong. He is of the belief that Gauhar’s team is the one that should have been in the red zone instead.

Later, the house receives the first captaincy task of the season. But Bigg Boss adds an interesting twist by making the red zone contestants the sanchalaks of the task. The remaining housemates are divided into two teams and begin to strategize to win. However, all hell breaks loose when sanchalaks Eijaz and Pavitra have a big fight and start arguing over decisions. 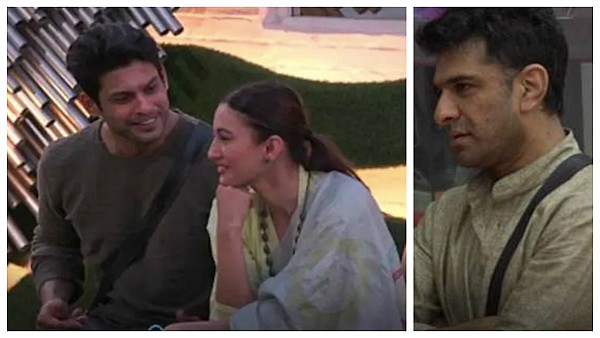