Legendary classical Indian vocalist, Pandit Jasraj died in the United States at the age of 90.

Pandit Jasraj’s career spanned 80 years and he had been conferred many prestigious awards including the Padma Shri, Padma Bhushan and Padma Vibhushan. He was introduced to vocal music by his father.

Reacting to his death, Bollywood playback singer Asha Bhonsle said, “I am deeply saddened by the unfortunate demise of Pandit Jasraj ji. I have lost someone who was extremely fond of me. I have lost a big brother indeed! Sangeet ka sooraj doob gaya! He was a vocalist par excellence and I knew him for so long… even before his marriage to V Shantaram’s daughter. He used to praise me a lot and he always used to say “Main tujhe gaana sikhaunga!”

Recalling a few fond memories with Pandit Jasraj, the veteran singer continued, “Back in the day, when I had visited his classical school in the US, where he used to teach music to so many aspiring talents, I remember how I had wanted to enroll myself into his school because he was that good! On that same trip, we’d gone out for dinner, and Jasraj ji, who was a staunch vegetarian, kept requesting me to also turn vegetarian for health reasons.”

Some of Pandit Jasraj’s classical and semi-classical performances have become film soundtracks.

“I will always remember his childlike demeanor. May his soul rest in peace!” added Asha Bhonsle.

Pandit’s daughter Durga Jasraj shared the news of his passing. “With profound grief we inform that Sangeet Martand Pandit Jasraj ji breathed his last this morning at 5.15 EST due to a cardiac arrest at his home in New Jersey, USA,” read the statement. 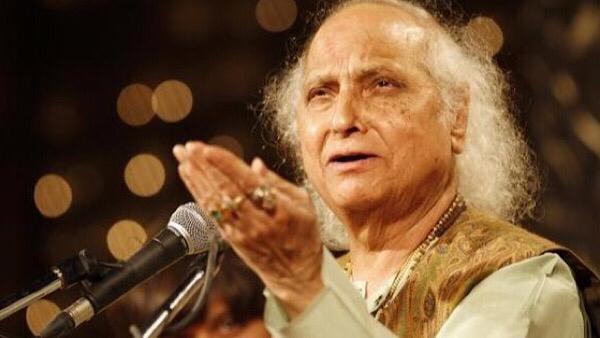