As film and TV shoots are set to resume in Mumbai after the guidelines by the Maharashtra government, FilmiBeat paid a visit to Film City (aka Dadasaheb Phalke Chitranagari). We checked out the sets of Alia Bhatt’s film Gangubai Kathaiwadi and Kapil Sharma’s chat show The Kapil Sharma Show to see how prepared they are to tackle COVID-19.

Sanjay Leela Bhansali’s Gangubai Kathaiwadi is gearing up to protect the film’s sets at Mumbai’s Film City from rain. FilmiBeat paid a visit to the sets and also saw all the guidelines issued by the Maharashtra government for film shoots in the Novel Coronavirus (COVID-19) pandemic being followed.

Upon visiting the Gangubai Kathiawadi sets, we noticed a liquid hand wash at the entrance, followed by a sanitising tunnel for the crew and visitors, and a doctor on set who checked the body temperature. A source revealed, “The temperature check takes place everyday. The unit has already started practicing for the new normal. There is also ambulance stationed outside the set.” Right now, workers have been employed to repair the sets and prepare for rain, and their temperature is also checked daily.

It is learnt that an additional Rs 6 crore has been added to the budget of Gangubai Kathiawadi, another ambitious film by the SLB who loves making mega movies. Gangubai Kathiawadi is a biographical film based on Gangubai Kothewali, a madam at a brothel in Mumbai’s infamous Kamathipura. The film is adapted from a chapter in S Hussain Zaidi’s book Mafia Queens of Mumbai: Stories of Women from the Ganglands.

While we saw sets of some television soaps getting a monsoon cover at Film City, chat show sets like The Kapil Sharma Show too, had some activity going on to prepare it for the new COVID-19 guidelines before comedian Kapil Sharma begins shooting. Reality and chat shows have been allowed to shoot without audience members due to the pandemic scare.

FilmiBeat spoke to Sangeeta Shelke, Studio Manager, Dadasaheb Phalke Chitranagari. She said, “The state government has issued a GR and we have been receiving applications from producers who are seeking permissions to shoot under the new guidelines. As soon as certain formalities are completed, we will be able to tell you when the shooting will begin in Mumbai and in Film City.” 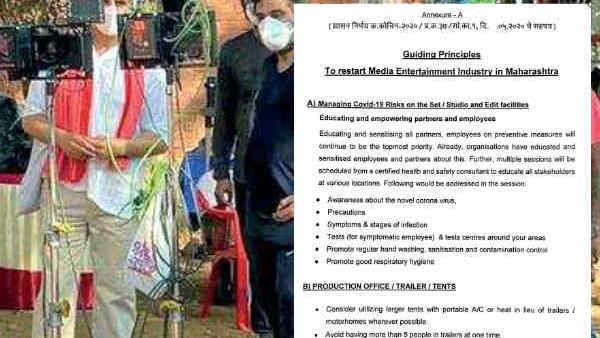