New Delhi: Actor Varun Dhawan’s niece Niara’s turned two on May 30 and in order to wish the little bundle of joy, he took to Instagram to share a couple of adorable pictures with her. Niara is Varun’s elder brother Rohit and Jaanvi Dhawan’s daughter. In the first photo, Niara can be seen in a playful mood while Varun cradles her and smiles while in the other, she cuts her birthday cake with her uncle by her side. Niara looks cute as a button in a pink dress with a matching ribbon on her hair.

Meanwhile, Arjun Kapoor, who shares a close bond with the Dhawans, shared another cute photo of Niara with her parents Rohit and Jaanvi from what appears to be her birthday party. “Happy birthday you beauty,” he wrote. 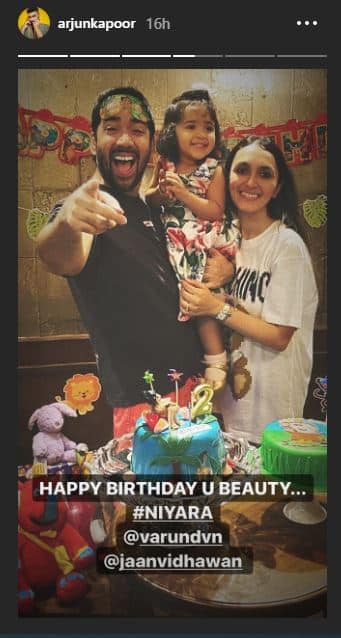 Niara often appears on Varun’s Instagram timeline. He dotes on her and these posts are proof:

Rohit Dhawan is a director and has made films such as ‘Desi Boyz’ and ‘Dishoom’, which starred Varun too. They are sons of filmmaker David Dhawan.

On the work front, Varun will be next seen in ‘Coolie No 1’, directed by David Dhawan. ‘Street Dancer 3D’ was his last film.